How To Make Sour Beer Balanced

by Gabe Jackson with Alec Klassen

Copyright 2019 by The Beverage People

First, how do people describe the best sour beers?  In reviewing descriptions on the beer review site Ratebeer.com, you can find a very clear correlation between the descriptions of sourness or acidity, and the scores the beers receive from reviewers.  The best rated current lambic for example, was Cantillon La Vie est Belge.  The references to acidity are all rather positive.  Here are a few excerpts:

In contrast, a lower scoring beer made in the United States and receiving an 80 point score and a 3.44/5 rating was described in far less friendly terms:

“sharp tang and a throaty burn”

“sour enough to turn my cheeks inside out”

Many of us can attest to drinking sour beers like this, and too often.  Why are professionals and homebrewers of sour ales producing so many of these puckering, heart burn inducing ales?  From my perspective, working daily with brewers in a supply shop, the problem seems to be a lack of knowledge about Titratable Acidity (TA).

What is Titratable Acidity?

Since brewers are only vaguely aware of the usefulness of Titratable Acidity, let’s look at how winemakers have settled on this measure as the key to balancing wine.

One of the great manuals on winemaking in the United States, a manual that assisted the trail blazing California winemakers of the 1970’s in their successful quest for global recognition of their quality, was Technology of Wine Making.  This manual was a product of the work at UC Davis in the 1950’s, 60’s and 70’s by Maynard Amerine and his associates Berg and Cruess.  He addressed the reasons for using Total Acidity rather than pH as a more appropriate measure of acid taste.

The acid taste is due to the hydrogen ion content but there is no direct relationship between pH and acid taste.  The buffer capacity of the wine, the relative amounts of the various acids, the sugar content and other factors influence the apparent acid taste.

All weak acids in a solution will fluctuate between associated and disassociated states. When associated, an acid displays no charge. When disassociated, a pair of ions of opposite charge are created, a positively charged [H+] cation and a negatively charged base [GLOB-] anion; GLOB stands in place of any organic acid base (e.g. lactate, citrate, malate, etc.). This fluctuation between states depends on several factors such as; temperature, concentration, buffering capacity of other compounds in solution, and strength of the attraction between the cation and anion.

The pH of a solution is the measure in concentration of only disassociated hydrogen ions (see figure 1). 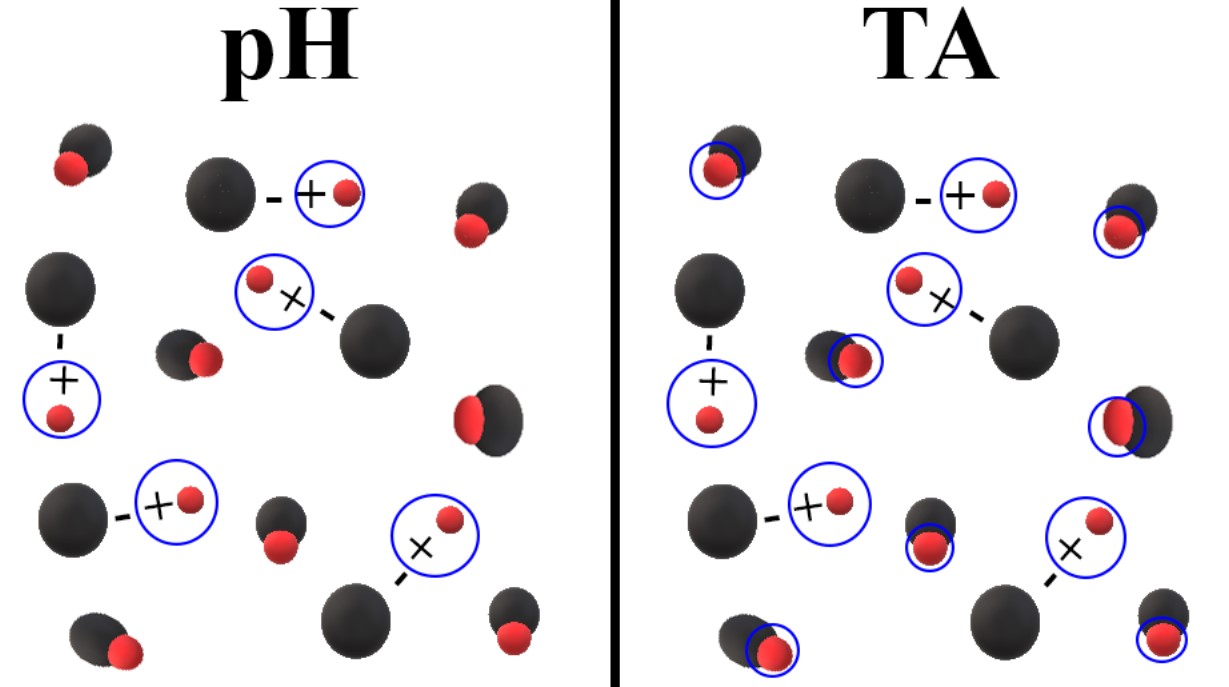 Figure 1: A visual illustration of the difference between pH and TA. Every black orb represents an organic acid base, and each red orb represents a proton. The respective measurements account for protons circled in blue.

The pH measure alone provides no quantitative information about the total mass of acids in solution, and that’s a problem. Because pH is strongly influenced by the buffering capacity of the solution, its representation of the total amount of flavor active acids in that solution can vary dramatically. So when it comes to the perception of sourness by the human tongue, pH is deficient. As free acid ions bind with flavor receptors, more ions dissociate to restore equilibrium. This continues until either flavor receptors become saturated or no more acid ions can be freed.

This is where TA comes in.  Titratable Acidity, typically expressed in g/L, is a measure of all the acidic compounds in solution that can be reacted with a strong base---this measure correlates strongly to how sour a solution will taste.  To determine the TA for a sour beer, a strong base (NaOH or Sodium Hydroxide) is used to forcibly rip every proton [H+] from the weak acids in solution. The mass of hydroxide [OH-] needed to completely disassociate the hydrogen ions can then be used to calculate the mass of acid per liter of beer. The results are generally expressed as if all the acids in solution were the same acid---whichever acid is predominant in that beverage.  In wine, the TA is expressed as if all acids were tartaric acid.  In sour beer, it is more appropriate to express TA as if all acids were lactic acid.

Lucky for us, running the test in a lab or at home is rather simple once you get familiar with it.

Now that you understand the merits of TA as a measure of acid taste in sour beer, I can recommend that you watch for sour beers with a known TA in the marketplace---if the brewers has listed this number on the label or website, there is a high likelihood the beer will have balance, or that you can at least understand how sour the bottle contents will be.

What Total Acidity range should we aim for?

My first and simplest recommendation is the same as I’ve given to new home winemakers for years---purchase a simple Titratable Acidity Test Kit, learn how to use it, and start testing sour beers as you drink them.  You’ll learn quickly how to run the test, and at the same time you will learn your own preference for Titratable Acidity.  Its very helpful to have a visceral understanding of what the TA number means to you.

To give a specific number you should aim to achieve in your sour beer remains somewhat elusive at this point in time.  Commercial examples are all over the TA map as knowledge of this test and how to express the results has been lacking.  Let’s look at some commercial examples for reference.  Refer below to review eleven beers in the Sour, Lambic, and Saison styles with TA (as lactic) ranges from 5.85 – 16.9 g/L.  This table reports TA for a selection of Belgian and American beers and also references the Ratebeer.com ratings and some comments from reviewers in their attempts to describe the balance of each beer.

The results in this table indicate that commercial beers are currently being sold at dramatically different fixed acid levels, but most drinker's experience of the balance falls fairly well in line with the TA measure of the beers.  My hope is that this table can be a beginning point for you to understand an appropriate TA for your beers.  The comments of these reviewers can be roughly grouped as follows:

How do we adjust acidity in beer and when to do it?

A Berliner Weisse may not be sour enough or Gueuze may have become just too sour to be balanced.

In these cases, determine the initial TA of your sample by using a test kit or sending a sample to a lab. Note that these tests will report back as g/L as tartaric acid, multiply this result by 1.2 to convert the results to lactic acid. Once the initial number is established, decide on a new target TA. This target may be determined by bench trial (small scale tests), experience, or an educated guess using the attached table for reference.

Intuition would make lactic acid the obvious choice for making any acid additions as it is already the primary souring agent in beer and it is very stable at cold temperatures. However, there is one negative aspect to note when using lactic. The most commonly available form of lactic acid---a liquid preparation of 88% lactic acid---contains significant levels of diacetyl, which may leave a buttery flavor in the beer. Yeast typically clean up diacetyl, so any lactic acid addition should be made at least a month before bottling. If you are in a hurry, tartaric (dominant in grapes) and malic acid (dominant in apples and stone fruits) are both available in dry form and they do not have the diacetyl problem. In the case of tartaric acid, however, tartrates may drop out at low temperatures, and malic acid presents a risk of spontaneous bacterial fermentation.

The math for a lactic acid addition is simple due the convenience that 88% lactic acid delivers very close to 1 g of lactic acid per mL. Note: all TA values shown are by g/L as lactic acid, be sure to convert your TA test results from tartaric acid by using the 1.2 factor noted above.

Decreasing the TA with Potassium Bicarbonate (Our Preferred Method)

Addition of 2.8 grams of potassium bicarbonate per gallon, or 0.74 grams per liter, will reduce acidity by 1 g/L as lactic acid. A reduction of about 2 g/L is a practical maximum. About 70 to 75% of the acid reduction will occur immediately and the remainder during cold stabilization. A salty or bitter taste will be evident in the beer from potassium ions when used at the upper levels. Be aware that you will get foaming when it is used because of the CO2 released

Other Factors in a Balanced Sour Beer

The influence of TA on perceived sourness is not absolute. Sweetness, acid types, bitterness, alcohol levels and carbonation levels also affect the balance. It’s important to keep these influences in mind when trying to pin down a target TA which best suits a given beer. Keeping logs of TA and other brewing data allows patterns to emerge, providing more knowledge as to what level of TA should be targeted for a given brew. All of this takes time and experience, which means more brewing!

OPEN AND PRINT A PDF VERSION OF THIS ARTICLE: