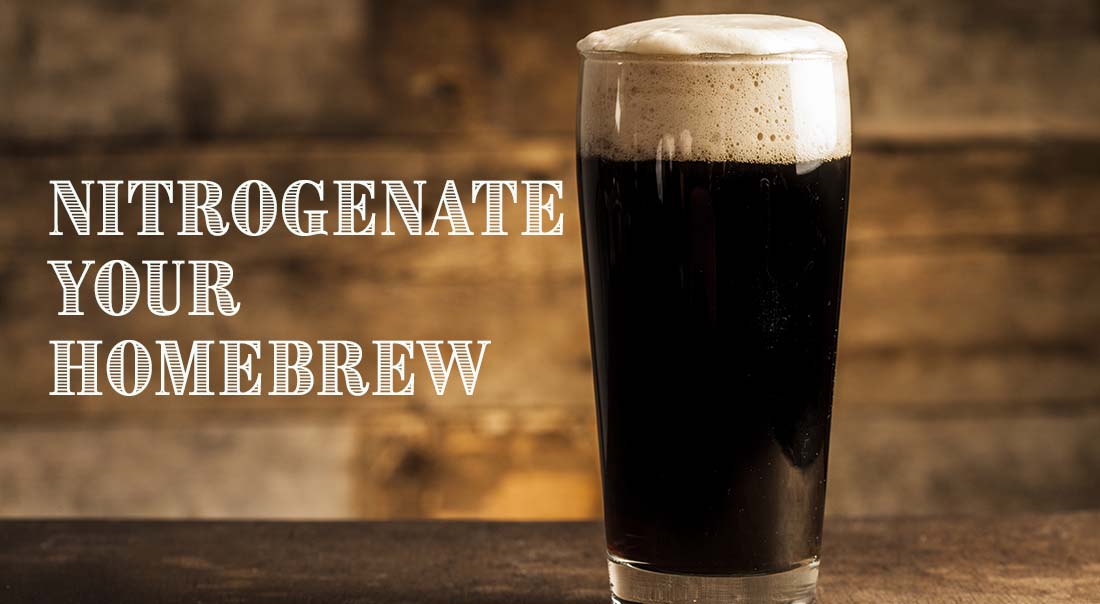 Nitrogenate Your Homebrew
by Gabe Jackson

In 1959, after experimenting for years, a Guinness brewer and mathematician, Michael Ash, hit upon the revolutionary system that would solve the “draught problem” for his brewery.  In those days, cask ale was pumped by hand through a “beer engine” from the cask to the bar.  The space in the cask was replaced by air---which is about 78% nitrogen and 21% oxygen.  The oxygen, unfortunately, has a staling effect on the beer which occurs rather quickly.  Ash found a way to introduce a mixed gas of nitrogen and CO2, without any oxygen, into the beer during service.  The new “easy serve system” was born.

How Does It Work?

Nitrogenated beer is conditioned and served at higher than normal keg pressures.  The higher than normal pressure results in the formation of very small bubbles when the beer is forced through a restrictor plate in the faucet at the time of serving.  If this process was attempted with only CO2 gas, the CO2 would readily dissolve into solution and cause a terrible over-carbonation disaster.  Unlike CO2, nitrogen is extremely resistant to going into solution---it is about 1% as soluble as CO2. Therefore, a mixed gas of 75% nitrogen, and 25% CO2 is used in order to obtain both high pressure in the keg, and low carbonation in the beer.   When the beer is forced through the restrictor plate into your glass, the smaller size bubbles created by nitrogen are pulled down the side of the glass by convection as the larger CO2 bubbles rise quickly through the middle of the glass.  This creates the “cascading” effect that is so mesmerizing when serving beers like Guinness, Boddington's, and Smithwick's.  Guinness claims that, in their beer, this cascading process should last for around 119.5 seconds.  Give or take.  In the end, a thick and creamy head of very small bubbles sits atop the beer giving the appearance and mouthfeel of a beer float.

A Discussion of Nitrogen versus CO2: Tanks and Regulators 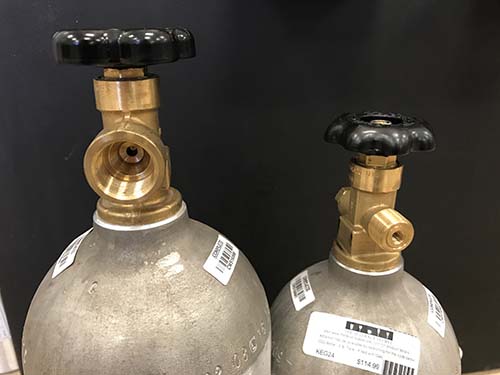 Since Beer Gas is 75% nitrogren, a Nitrogen tank and regulator should be used for these beers.  Nitrogen gas does not compress into a liquid at normal pressures and temperatures, rather it is forced into a high pressure tank until the pressure limits of the tank are approached, usually exceeding 2000 psi.  CO2 goes into a liquid state and maintains a vapor pressure in the tank of between 600 – 1000 psi at room temperatures.  Greater volumes of liquid CO2 can be put into a CO2 tank than is the case with gaseous nitrogen, therefore the nitrogen or Beer Gas tanks in use tend to be larger.  They also tend to be thicker to handle the higher pressures. Since the pressure is so much higher in a nitrogen tank, a different pressure gauge is needed as well. CO2 gauges generally won’t go high enough for nitrogen. To avoid damage to the regulators, different thread patterns are used on the different tanks to avoid incorrect usage.  Nitrogen tanks usually utilize a CGA-580 nitrogen-style female rather than the CGA-320 CO2-style male. Adapters are available if you choose to fit a CO2 regulator to a nitrogen bottle. 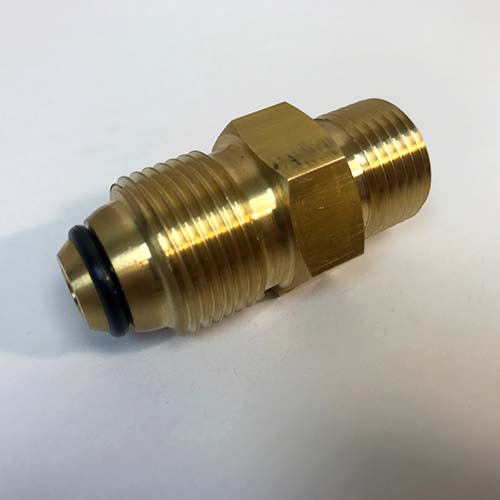 How to carbonate with Beer Gas

Higher pressures are required, generally 30 – 45 psi (35 – 45 degrees F) in order to get the appropriate amount of CO2 into solution.  Do not plan on bottling or transferring to a growler, it will be a mess and you will end up with flat beer.  Most of the time, a low carbonation level is ideal.  Targeting 1.8-1.9 volumes of CO2 to beer ratio generally works well. For reference, CO2 volumes for stout beers such as Guinness range from 1.2 volumes to craft stouts with up to 1.7 volumes. Ales and lagers can range from 2.2 up to 2.8 volumes and in some craft beers such as Saison and Hefeweizen the carbonation may exceed 3 volumes.  The following instructions will help you target volumes of 1.8-1.9.

Using CO2, we would traditionally target about 10-12 psi on our regulator to achieve the 2.2-2.8 volumes typical for our beers.  Given that Beer Gas contains only 25% CO2, we will need 4 times the pressure to get the same amount of CO2 into the keg.  Thus, to achieve “normal” carbonation levels,  we would set our PSI in the 40-48 range.  However, most Nitro Beers are best with a lower carbonation level.  If we are serving a stout or other beer in which we desire a lower level of carbonation, using a lower psi such as 30-40 may be appropriate, but be sure to allow more time in contact with the beer before serving (or use a diffusion stone) as it will take longer to carbonate at the lower pressure.  Use this carbonation chart to correlate temperature and pressure, but remember, with 75% nitrogen you will need 4X the pressure to force the 25% CO2 into solution.  You will also need to consider your serving temperature at this point.  For reference, Guinness recommends their beer is served in the low 40's and at about 30 psi pressure. Why do we end up at 30 PSI?  Here is a math example:

At a temperature of 43 degrees, 7 psi CO2 will result in 1.9 volumes, therefore:

A Stout or Restrictor faucet is required to agitate the CO2 out of solution under high pressure and cause the beer to “cascade” in the glass. 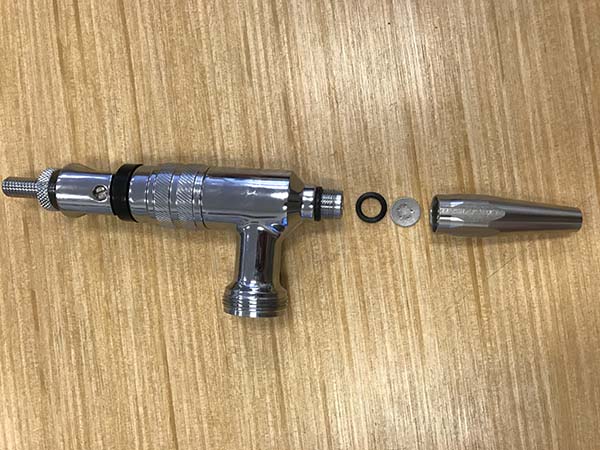 Exploded presentation of a Stout Faucet with Restrictor Plate 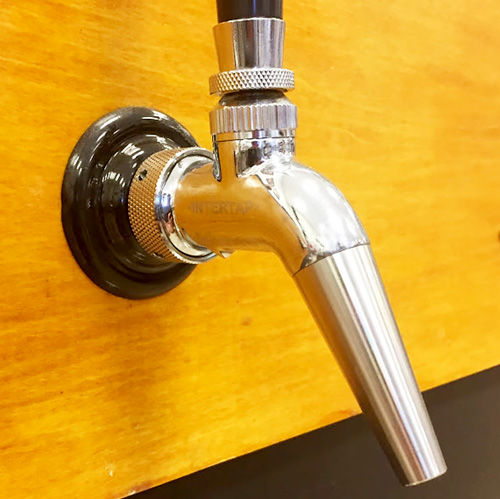 Note that the plate can be removed for standard beer service. Some faucets, such as traditional Guinness Stout creamer faucets, have a “creamer” function which is activated by pushing the faucet handle backward resulting in increased agitation and more foaming or cascading in the glass.

For an ideal pour, leave the glass below the faucet for longer than usual as the long spout of the stout faucet will drip longer than other faucets.  Also, the initial pour should only fill the glass about ¾ full.  Allow for the beer to cascade, and then top up so the foam rises just above the top of the glass.

As usual, the colder you store the beer while forcing CO2 into solution, the better it will be dissolved.  As for serving, typically ales and lagers are served at pubs at around 36-38 degrees F.  When serving beers with nitrogen, a slightly higher serving temperature may be desirable, such as 40-42 degrees F.  This is the recommended practice for Guinness Stout, for example. This will result in somewhat lower solubility of CO2, so a slightly lower carbonation level.  Remember also that cold temperature can be numbing to the senses.  The higher serving temperature will allow yourself and your friends to enjoy your homebrew with a softer mouthfeel and more flavor expression!

Most brewers with keg systems never go to the added expense of a Beer Gas system.  Alas, purchasing one more tank, regulator, and faucet might seem over the top and unnecessary.  But bear in mind which beers are benefited most by such a system.  Low hop and low alcohol beers---these beers are generally much cheaper to produce.  If these are beer styles you enjoy, you are sure to enjoy them much more when served on Beer Gas.  This was part of the brilliance of Michael Ash's invention.  It makes cheap beer exciting!

As published by Brew Your Own magazine, Michael Tonnsmiere had some thoughts on how to adjust your homebrew recipe when you plan to serve the beer on Beer Gas.  Due to the expected lower carbonation rate, there will be less carbonic acid in the final beer.  To make up for this lower acidity, he recommends increasing the acidity in the recipe with specialty malts, acidulated malt, or reducing your chalk usage.  This will help you avoid a flat or dull tasting beer.