Our Adventure Making A Large Batch of Cheese

Gabe Jackson and I were getting ready to teach a Beginning Cheese Making class when a local dairyman came into The Beverage People to make a unique offer. He was going on vacation and would have about 15 gallons of Jersey milk available if we wanted it. Of course we said yes! 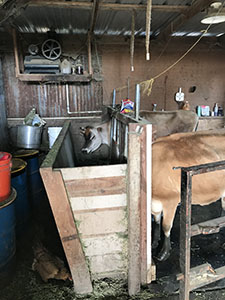 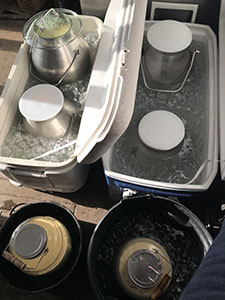 When we went to pick up the milk, there was actually about 25 gallons! After a few moments of panic, we realized that we could turn Gabe’s brewery into a creamery for the day. Our next challenge was to figure out how much culture and rennet to use in 2 pots of about 12.5 gallons each. We decided to make cheddar using the recipe in Artisan Cheese Making At Home by Mary Karlin. However, her recipe is for using 2 gallons of milk so we needed to research how much to use for 12.5 gallons. Abandoning the usage rates in the recipe, we used the commercial methods of calculation---MCU dosage rates for rennet and DCU dosage rates for starter culture. 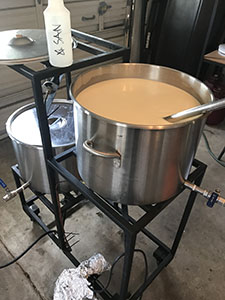 MCU is a short-hand reference to International Milk Clotting Units, a standard set by the International Dairy Federation to determine the total milk clotting activity of calf and kid rennets. By using MCU references you can easily substitute one type of rennet for another and achieve the desired clotting activity even when the strengths are different. The most popular rennet at The Beverage People, for example, is Marzyme microbial rennet. In this spec sheet, you can see that the MCU strength is 200-220 and for a cheddar cheese you would use 1.25 – 1.5 oz per 1000 liters, which translates to just under ½ tsp for 12.5 gallons.

Danisco Culture Units – DCU is measure of the bacterial activity level in a given packet of cheese culture. It is neither a volume, nor a weight measure. Instead, it represents the capability of a given sachet of culture to acidify and ripen the milk. Each unit will treat about 2.5 – 5 gallons of milk, generally, though DCU requirements vary by cheese type. The most popular culture at The Beverage People, for example, is Farmhouse MA4001. In this spec sheet, you can see that DCU strength is in this packet is 25 DCU and for a semi-hard cheese such as cheddar you would use 5-10 DCU per 100 liters, which translates to about 2.5-5 DCU for each of our 12.5 gallon batches.

We also decided that calf rennet would be best for our large wheels, since they will need long aging and calf rennet has a better reputation for breaking down bitter peptides that form during the aging process.  Therefore, we calculated our rennet needs based on the 310-325 MCU strength of the calf rennet stocked in our store.

We heated the milk to 88°F which took much longer than we expected and sprinkled on the Meso II culture. After stirring in the culture and letting it rest for 45 minutes, we added the rennet (no need for calcium chloride since we were using raw milk) and maintained 88°F temperature while we waited for a clean break which took close to an hour. Since neither of us has ever before made a batch of cheese using more than 4 gallons of milk, each step was a new adventure. Luckily, my curd cutting knife was just long enough to cut the curds.

As we slowly raised the temperature in each pot to 102°F. we realized that one pot was heating faster than the other which seemed to complicate things but in the end allowed us to handle the curds separately. As we slowly stirred the curds we were amazed at the beautiful color developing! We did not add any annatto but the curds were a beautiful yellow from that fabulous Jersey milk. 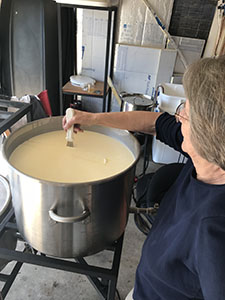 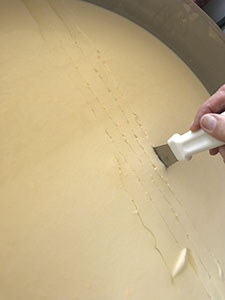 Following the instructions, we let the curds form into a slab and maintained temperature while the slab kept expelling whey.

While this was going on we had to figure out how and where we could possibly cut curds for a slab this size! We finally decided to use a whole section of Gabe’s kitchen counter surrounded by many large towels. We still made a big mess but it actually was lots of fun. Of course by now the entire Jackson family was involved as we were all amazed that the actual amount of cheese we had! 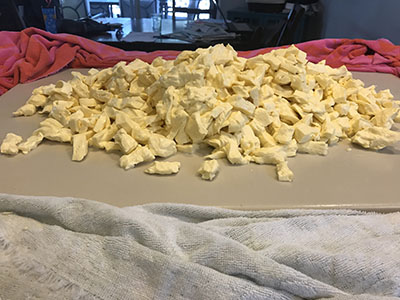 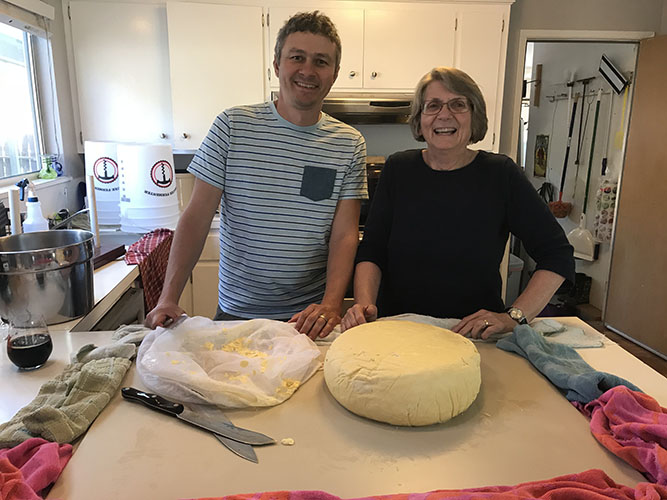 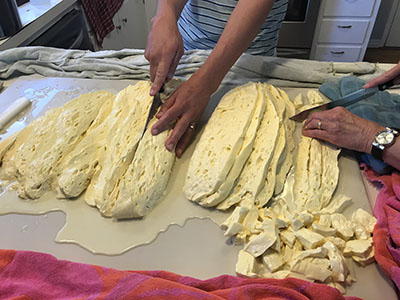 After cutting all the curds from both batches, we were able to stuff all the curds into 4 large hard cheese molds and begin pressing. This presented another problem for us. Yes, we knew what weight to use for a 2 lb wheel (8-10 lbs weights), but what about an 8 lb wheel? Also, the press we were using could hold two pressing molds at once, so we were actually pressing two 8 lb wheels at the same time. Now we were looking at 8X the amount of cheese we would usually press. We had to experiment by ramping up the weights on the pressing plates until we used ALL the weights we had---85 lbs on a single press! Luckily, years ago I had been warned I would need the big 25 lb weights if I ever made big wheels of cheddar, and they sure came in handy. 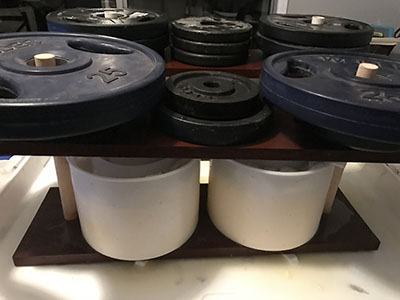 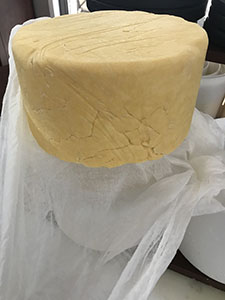 Two of the cheeses never did knit (this is when the separate curds come together as a solid wheel of cheese) as well as we would have liked. The difficulty knitting these wheels was one of the big lessons learned from the experience. The two vats acidified at different speeds. It seems this was due to the fact the milk in each vat contained milk from different milking days, and potentially different animals. Due to the differences in acidification, we ended up pressing them at different pH levels---5.45 and 4.9. The cheese wheels at 5.45 knit together very well. The cheese at 4.9 did not, and mechanical openings remained around the rind and within the wheel. In retrospect, this poor knitting could have been avoided by getting all the cheeses into the presses before they had acidified to 5.0 and below, at which point the texture becomes crumbly and the curd has difficulty matting together.

After taking the wheels out of the molds and drying for a couple of days, 2 coats of cream wax were applied to each cheese and they were put in ripening boxes in my cheese “cave”.

For the two wheels which did not knit as well, we decided to hard wax them after a couple of weeks to seal the openings around the surface. 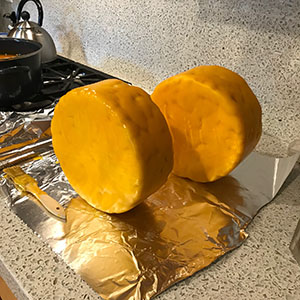 The other two were given another coat of cream wax. They are now aging, probably until the holidays, when we will break them open and see what we have! Until then, I am turning them over once a week.

This entire process was quite an adventure. Now that we know it is pretty easy to turn a brewery into a creamery, we would love to try a big batch again! 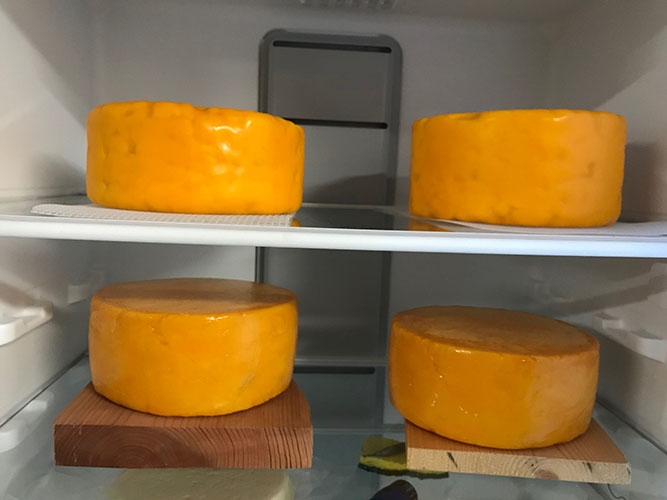