by The Beverage People

Learn how to make Apple Cider in the heritage New England style from start to finish.  Homemade heritage cider is a great way to enjoy the bounty of the harvest! 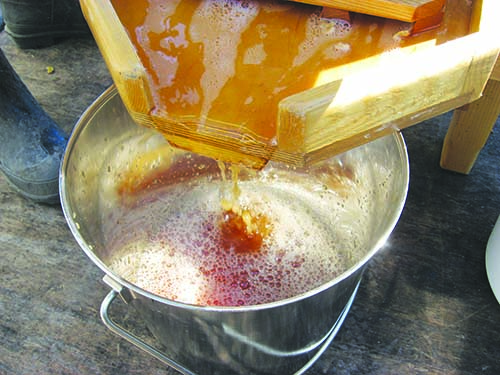 New England heritage ciders is known for being relatively alcoholic because of different kinds of sugars being added including corn, cane, brown, molasses, honey and even raisins. Alcohol levels are usually between 7 and 13%, making them noticeably stronger than their European counterparts. Theses sugar additions also contribute flavors to the cider. These ciders are traditionally rather dry, but can be sweeter when balancing higher alcohol levels. They should have some tannin character and should have moderate acidity. Traditionally, these ciders were often aged for some time in oak barrels. The barrels often came from local distilleries when they were done with them. Therefore, many New England ciders will have some spirit character to them in addition to the sugar additions’ character. Original brix should be between 14 and 24 Brix. New England ciders do not commonly go through MLF.

If you don't have these types and are instead using low tannin culinary apples, follow the instruction below with astrisks *.

For a more general discussion about how to make apple cider in the New England Style, and comparison to other styles, click here.

For The Beverage People's step-by-step instructions, continue below.

USE THE FOLLOWING LINK TO VIEW AND PRINT THE RECIPE.