Managing Oxygen During and After Wine Bottling

by Jane Jackson and Gabe Jackson, Copyright by The Beverage People 2022

Before reading this article, you might try to summon your inner wine geek. You’ll want his (or her) company for this topic. We have endeavored to make this discussion accessible and understandable for the average winemaking hobbyist. Still, you’ll want that inner wine geek to keep you motivated to keep track of different acronyms involved in this discussion (TPO, OTR, DO, HO) and to push you along when imagining ppm’s (parts per million, or mg per liter) swirling around in your wine. If you and your geek make it to the end the discussion, and if you apply the lessons involved, you can expect your future self to thank you for improved quality wine that ages well!

What is Total Package Oxygen (TPO)

What is Oxygen Transfer Rate (OTR)

Oxygen Transfer Rate (OTR) is the ppm of oxygen over time that passes through the cork into bottled wine.

Why are TPO and OTR important?

Poorly managed oxygen exposure can lead to browning, reduced aromatics, off flavors, and the growth of spoilage organisms.  High levels of TPO and OTR generally reduce the shelf life of the wine in the bottle.

Target range of TPO in ppm

TPO targets are shown below, based on research cited by the Australian Wine Research Institute:

In many cases you should aim for less than 3 ppm in the first year after bottling, including TPO at bottling time plus the OTR from the cork.  High tannin wines may be able to accommodate higher TPO levels.

What contributes to TPO?

1. Dissolved oxygen (DO) in the wine.

Dissolved oxygen (DO) already present in the wine at the time of bottling has resulted largely from SO2 management, long term bulk storage conditions, and methods of racking. Based on The Beverage People’s own experiment testing DO levels associated with various wine transfer methods, we can assume that an average total of around 1 ppm of oxygen is introduced into the wine during the bottling process by either pumping or siphoning, both of which are typically performed twice in order to get the wine into the bottle.

We have published two companion articles specifically focused on dissolved oxygen management.  Refer to these articles to broaden your understanding and mastery of this vital topic. 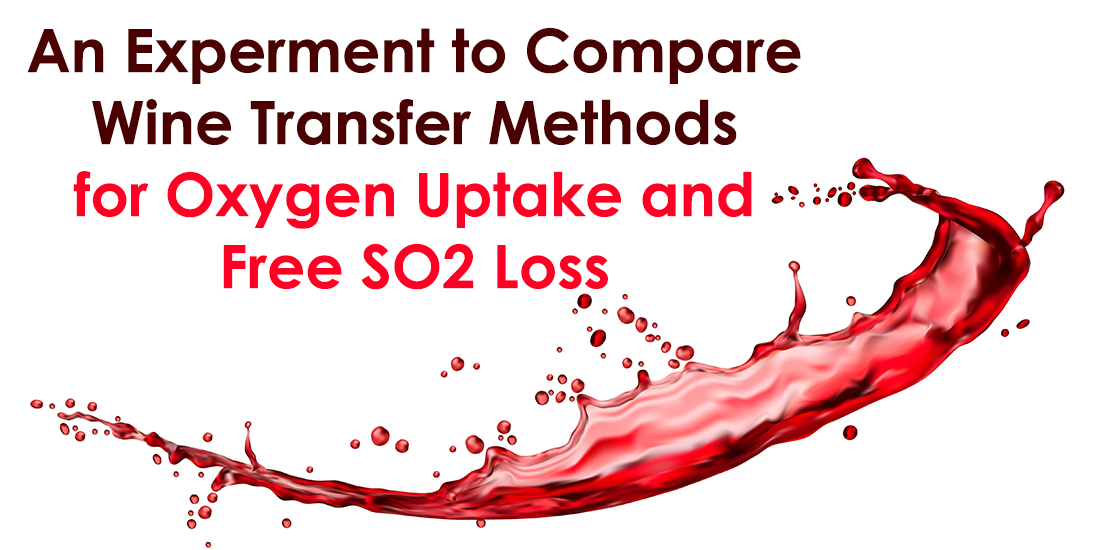 Read about our experiment testing DO levels for siphoning, pumping, and splash racking.

Read an advanced discussion on measuring and mitigating oxygen pickup during the winemaking process.

Headspace oxygen in the bottle at the time of bottling is the oxygen present in an empty bottle if not displaced by an inert gas before filling with wine. It also refers to the space left between the wine, after filling, and the cork. The Australian Wine Institute reports that bottles can be successfully purged with inert gas of 60-80% of the oxygen during bottling. This will result in 0.8 – 1.5 ppm of oxygen being left in the headspace of the bottled wine. Not purging the bottles will result in around 4 ppm of oxygen.

3. Release of oxygen from cork insertion.

Oxygen is released from a cork during compression and insertion. All corks have spaces in them, though they may be difficult or almost impossible to see, that will harbor and release oxygen as they are compressed by the action of corking a bottle, and as they expand in the bottle after being inserted. Additionally, corks are porous to varying degrees and will allow oxygen to enter the bottle over time, i.e. OTR.

Choosing Corks Based on Insertion Oxygen, OTR, and Expected Life 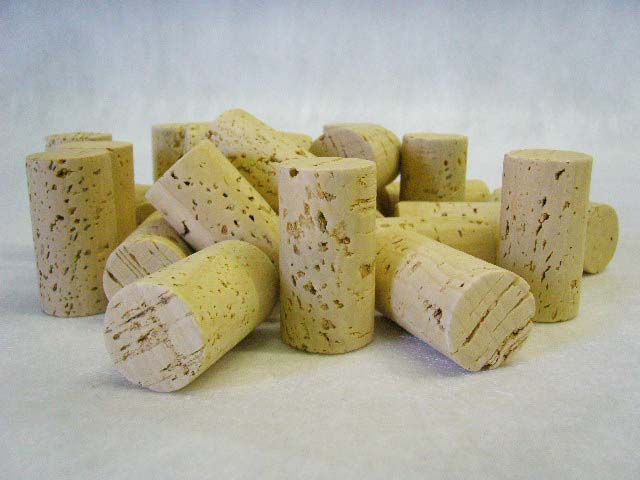 All Natural UF25 and Chamfered UF30 from M.A. Silva are a single piece of cork.  These corks contain the highest amount of oxygen due to their porosity but you can expect them to last longer than agglomerated corks.

Agglomerated corks are denser than the All Natural corks. This density results in a lower OTR. Be aware, however, that they are subject to breaking while uncorking after several years in the bottle. 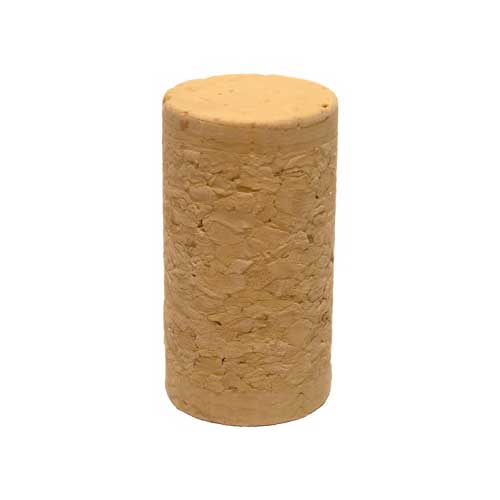 The Twin Disk from Xiberta, an agglomerated cork with natural cork disks at each end, is denser than both All Natural corks but less dense than fully agglomerated corks. You can expect about 1 ppm of oxygen addition to TPO from the insertion of this type of cork. 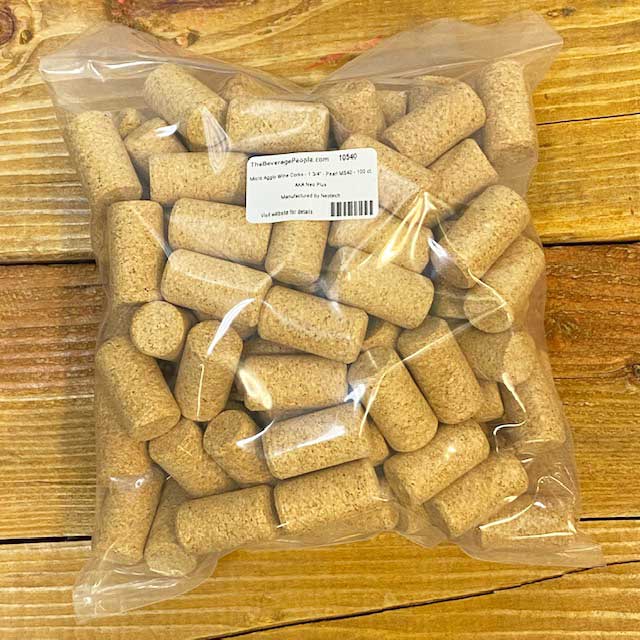 Pearl® Micro Agglomerated from M.A. Silva, an agglomerated cork held together with FDA-approved food-grade agents, is denser than both All Natural and Twin Disk corks. You can expect about 0.5 ppm of oxygen addition to TPO from the insertion of this type of cork.

Two basic questions to ask when choosing a cork are:

1. Is the wine intended to be drank within a year or two, or is it intended to be aged over many years?
2. What is the DO level of the wine at the time of bottling, along with the accompanying HO?

With this knowledge, an informed cork decision can be made based on the TPO + the OTR of corks stocked at The Beverage People.

If a wine is already high in DO/TPO at the time of bottling, it might make sense to choose a cork with a lower OTR to slightly prolong shelf life. If this wine is something like a robust Cab or Syrah with tannins and anthocyanins which would benefit from micro-oxidation over many years in the bottle, an All Natural cork makes sense.

How to Decrease DO/TPO Throughout the Winemaking Process

1. Make proper sulfite additions and manage SO2 levels throughout aging.

Sulfite binds oxygen and protects the wine from spoilage.  Need a  refresher on SO2 usage?

This article has been our go-to reference at The Beverage People for understanding and making additions of SO2 in wine or cider.

2. Know the SO2 loss and oxygen uptake that is likely in your method of racking.

Adjust SO2 levels immediately prior to racking to accommodate for this. Reference our article on comparing three common methods of racking and their effects on DO.

3. Use an inert gas such as nitrogen, argon, or CO2 to purge oxygen from your bottles.

Use an inert gas such as nitrogen, argon, or CO2 to purge oxygen from your bottles just prior to filling, and to purge the headspace left after filling just prior to corking. A study in Australia of various bottling lines found that headspace oxygen typically accounts for more than 60% of the TPO in bottled wine. The solution to this can be as simple as a bottle of Private Preserve.  For bigger bottling jobs, a purge wand connected to a tank of gas and regulator are a more efficient and cost effective solution. 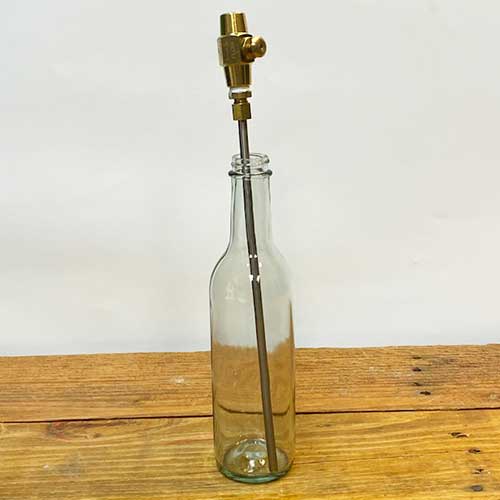 A purge wand can be connected to any gas source.

4. Choose a cork for the wine based on type of wine, insertion oxygen contribution, OTR, and expected life in the bottle.

a. Type of wine – higher tannin wines do well with higher OTR from the cork. Low tannin reds and white wines may suffer from shorter shelf life if the cork permits too much oxygen in the bottle.

b. Insertion oxygen - a wine that already has a higher DO or HO would benefit from a low insertion rate cork.

c. OTR – a wine that already has a higher TPO would benefit from a low OTR cork to extend its shelf life.

d. Expected life in the bottle – extended bottle aging requires a cork that can last. Agglomerated corks become too brittle and break easily upon uncorking after more than a few years in the bottle. 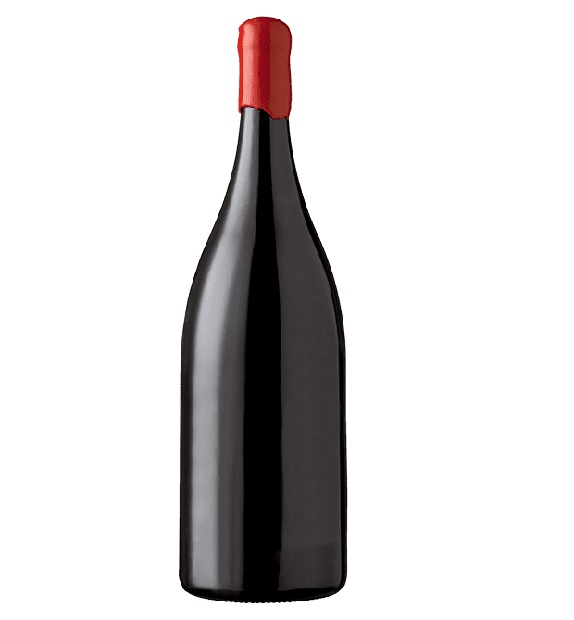 Kegging wine is becoming more common. This is a good solution to many problems, including buying and storing bottles, especially if one already possesses a gas system for purging. Rather than having to purge case after case of bottles, there is one (or more depending on volume produced) large vessel to purge, fill, and purge again. A stainless keg under pressure has no oxygen ingress.

Learn about how to keg wine.

Journal of Agricultural and Food Chemistry (2006) Impact of Storage Position on Oxygen Ingress through Different Closures into Wine Bottles.

M.A. Silva, with thanks to product and technical support administrator Pamela Stevens.