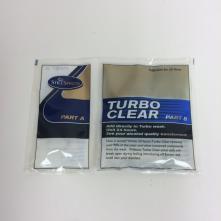 Still Spirits Turbo Clear is a fining agent for your distillation wash that is effective within 24 hours.

It is a two-part system utilizing both Kieselsol and Chitosan in two steps. You may add it directly to up to 25 liters (6.5 gallons) of wash to drop out 95% of yeast and other solids before distillation. This is an important step because yeast may break open during the boiling process and release undesirable off-flavors.

How Does it Work?

Kieselsol (Part A) and Chitosan (Part B) are fining agents with opposite polarities. Kieselsol, AKA silicon dioxide, is negatively charged.  Chitosan, composed of chitin derived from the exoskeleton of crustaceans, is positively charged. When used together they are effective at removing most solid particles including yeasts and proteins.

After fermentation is complete, the wash should be stirred to degas. Part A is added to the wash and allowed to stand for an hour. Next, the content of Part B are gently mixed into the partially clarified wash and everything is allowed to settle for 24 hours. The clear wash may then be carefully siphoned off of the sediment.