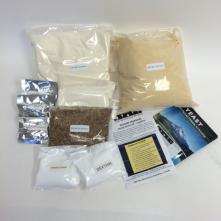 Members also receive a 10% back dividend. On this item, the dividend is $5.58. Click for details.

Be aware, laddie (or lassie): if it says Scotch Ale (like this one), it's a wee bit stronger than a beverage called Scottish Ale. This strong beer gained international renown as early as 1578. Our version is an amber, malty ale that may bring you visions of kilts and highland dancing. Also consider enrollment in one of our Upcoming Brewing Classes where we'll help take those brewing skills to the next level.
Specifications