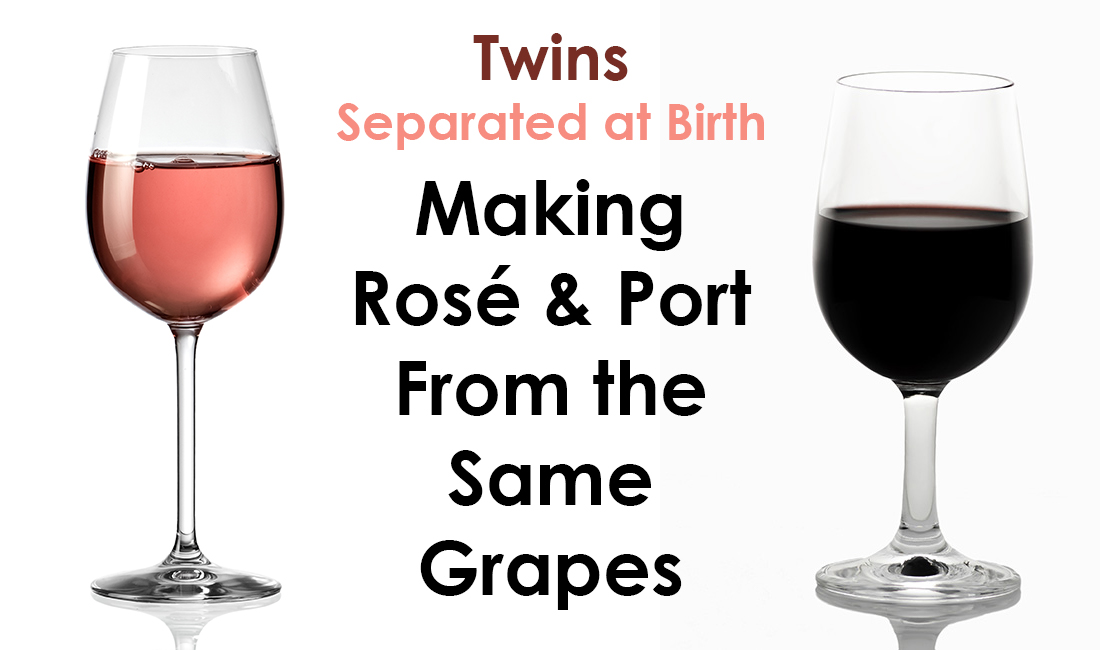 Rosé and port-style wine are extreme expressions of red grapes. In the first, color is played down through short skin contact and a light, refreshing wine for summer quaffing is the desired result. For the second, intense winemaking techniques are followed, including alcohol or sugar additions, to produce a powerful wine consumed in tiny glasses by the fireplace.

Many grape varieties find their way into these wines. In France, Grenache is often made into still rosé and Pinot Noir is used for sparkling brut rosés. In California, both of these and many more varieties may be employed. One standout, both commercially and in home winemaking, is Syrah.

For Portuguese Port, several traditional varieties are used. The most prominent is Tinta Roriz (Tempranillo), plus Touriga Nacional and Touriga Franca. While these grapes may be used for port-style wines elsewhere in the world, we also see Zinfandel and Cabernet Sauvignon used in California, and Syrah used here and in Australia.

So, what about Syrah? Since it does well as both rosé and port, why not make both from the same lot of grapes? For the 2006 harvest, my wife Marty White and I set out to do just that.

Two Fermentations from the Same Harvest

We found some high-quality local fruit at Nolan Vineyards in Santa Rosa’s Bennett Valley.  We picked about 250 pounds of grapes and ran them home in the SUV with the air conditioning on to keep the fruit in its cool picking condition. The grapes were beautiful, with no rot, very few raisins, and excellent color. Upon crushing and stemming, we measured 26.2° Brix and 0.54 g/100 mL Titratable Acidity.

As is our usual practice, we had added 50 parts per million SO2 as the fruit was being crushed. We let the crushed fruit stand on the skins for three and a half hours, then pressed off ten gallons and put the juice in carboys to settle before becoming rosé.   From this point on for the rosé, I followed standard white winemaking practices. 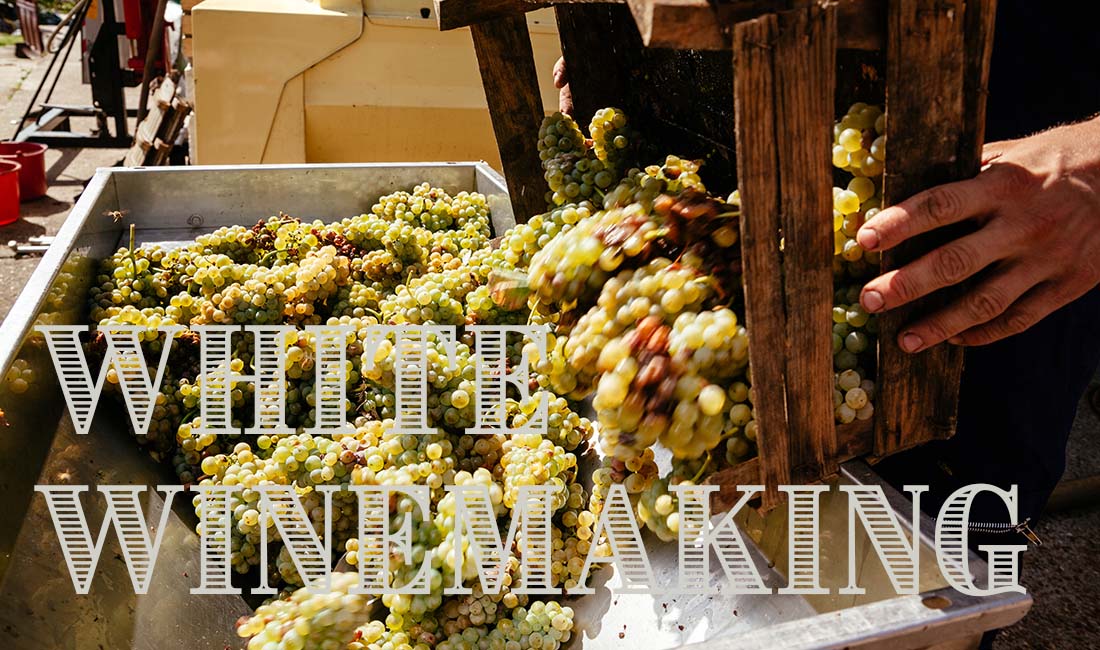 To the remaining must in a 10-gallon open fermenter, we added back as much of the pressed skins as would fit to achieve more intensity for the port. 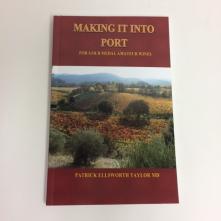 After letting it settle overnight, we racked the pink juice into two seven-gallon carboys and added five grams of Epernay II yeast to each. We stirred the port must and sprinkled 10 grams of the same yeast on top. By the next day, fermentation foam had appeared on the rosé and the port had begun forming a cap. We added five grams of Fermaid K yeast nutrient to each carboy of the rosé, but since we never intended to let the port finish fermenting, we added no additional nutrients.

From that point, the rosé went on merrily fermenting just like a white wine. Meanwhile, we were treating the port like any red wine, including twice-daily punchdowns. After one week, the port was down to 10° Brix by hydrometer, our target value for a rich residual sugar level. Because we are also home brewers, we have several five-gallon stainless steel soda kegs for draft beer. One of these was used to help stop the port fermentation. 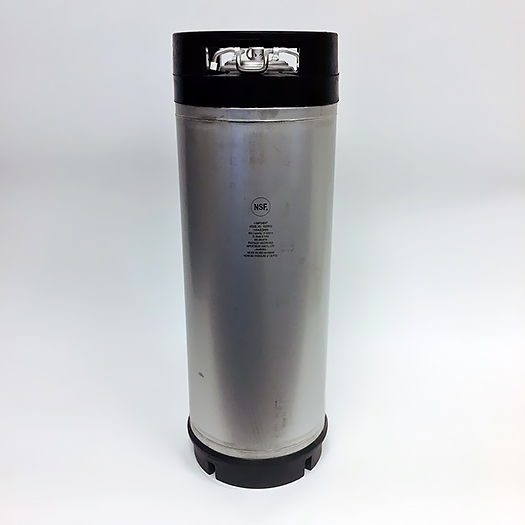 I made use of a soda keg packed in ice to help stop the active fermentation.

We pressed the still-fermenting must, poured the semi-finished wine into the keg, added 50 parts per million SO2, and packed the whole thing in ice in a 20-gallon plastic fermenter. As we hoped, the chilling made the yeast slow dramatically and drop to the bottom of the keg.

Next, time to fortify! Having fermented our port to ten Brix, we then wanted to raise the alcohol to about 19%. To do that, it was time to haul out Pearson’s Square:

The Portuguese use fresh grape brandy at high proof as the spirit (basically, white lightning of grapes). We cannot buy that here, so we used grain neutral spirits instead. In California, 151 proof, or 75.5%, is the highest proof available. To calculate the approximate wine alcohol level, we subtracted the current brix (10) from the starting brix (26.2) to find 16.2° Brix consumed. Multiplying that times 0.55 gives an estimated alcohol of 8.9% by volume.

In January, we racked the port to a five-gallon carboy plus a half-gallon jug. Along with nice flavors of berry jam and spicy black pepper, there was a noticeable alcohol warmth and, unfortunately, a slight sulfide stink. So much for not using nutrients! The rosé was fine. (Considering these wines came from the same grapes, that is a pretty good demonstration of using nutrients to prevent sulfides!) We treated the port with copper sulfate, racked again, and it was fine. The rosé was very nice, with notes of berry and melon in the nose and a crisp, refreshing flavor profile. We bottled it without added sweetening in March and we are enjoying it now.

As expected, its twin, the port, has been much slower in development. When we tasted it in March, it had cleared up very nicely, had no sulfide aromas, and had smoothed out quite a bit. It seemed to need just one more smoothing touch, so we added one dark French Winestix stave to the carboy and let it rest. I also measured the free sulfite level at this point. The reading of “low” sent me scurrying to add another 40 ppm of SO2. 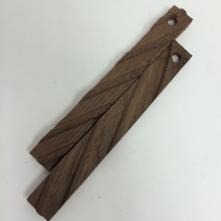 Winestix used to increase the oak presence in the Port.

We tasted the port again in May. It is coming along very nicely. Now we get distinct cherry notes in the nose, along with vanilla from the dark oak. It has a clear appearance with a smooth finish. We added SO2 again (it was “low” again) and left it to mellow a few more months.

From that single lot of Syrah grapes, our twins were evidently fraternal— certainly not identical! The young, precocious rosé is already drinking at its prime and will probably be gone before the year is out. The port, on the other hand, continues to develop at its own pace. We will taste it again in August and bottle it, or maybe leave it alone until after next year's harvest. The wine will tell us when it is ready, and we will be drinking it for years to come. So even if you have just a single source of fruit, don’t think you are limited to a single kind of wine!