Oxidation and Reduction in Wine - The Evil Twins of Chemistry 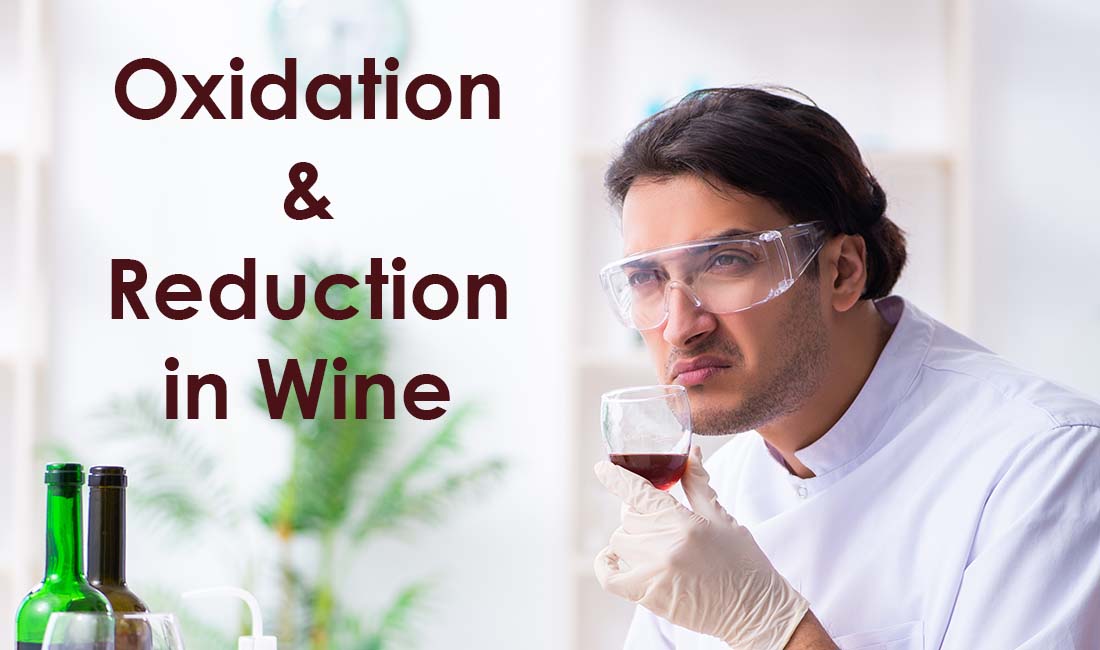 Oxidation and Reduction in Wine

The Evil Twins of Wine Chemistry

Two of the most common types of wine flaws faced by winemakers are oxidation and reduction issues.  The chemistry of these two types of flaws are related, as you will see.  Understanding the chemistry will help you avoid, and treat these issues.

When we talk about problems in wine, we often run across chemical reactions called “oxidation” or “reduction.” Since we usually talk about just one of those reactions at a time, it ends up sounding like that one stands alone. In reality, though, oxidation and reduction are more properly called “half reactions” and they work together to create a complete reaction. When I used to work in environmental labs, we often noted that to get one thing clean, you need to get something else dirty. In a parallel example, to get one thing oxidized, you need to get another thing reduced. That field of chemistry is named with the abbreviation redox.

Keeping it as clear as I can, I will need to go through some redox basic chemistry before discussing the direct effects on wine. Oxidation and reduction are all about the exchange of electrons. Those negatively-charged particles that schoolroom charts depict as whizzing around atomic nuclei are naturally in balance with the positively-charged protons in the nucleus when an atom is in its most fundamental elemental state. We call that the zero oxidation state. Other configurations of electrons are possible for each element, but only in certain favored patterns. When an atom loses electrons, we call that oxidation and when one gains electrons it is reduction. Since it is challenging to remember which is which, my old chemistry professors gave us a mnemonic device based on a lion to help remember:

(see below, the lion is growling…)

Younger colleagues here at The Beverage People have told me, at least at UC, they instead present the mnemonic:

Oxidation is loss, reduction is gain.

So if either of those works for you, keep it in mind when we get to actual wine reactions! 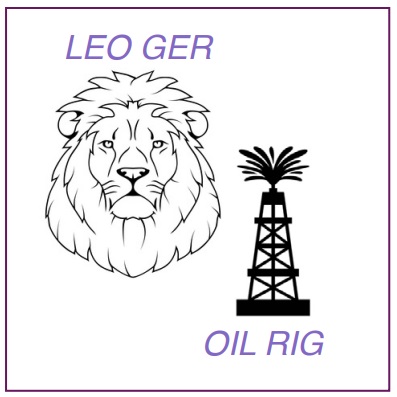 Oxygen is the principal oxidizer in wine and indeed gives the reaction its name.

For our hobbies, the oxygen comes as a component of atmospheric air. The air is about 21% oxygen, 78% nitrogen, and one percent all other gases. When air is introduced into winemaking, oxidation will result. It is important to note, however, that it is not always bad! (More on that below). As with other elemental forms, when oxygen is in the air as O2, it is in the zero oxidation state. When it oxidizes another atom or compound, it experiences the gain of electrons described above as it is reduced. Electrons are negatively charged, so it goes from being at the zero state (O0) to either the minus one or minus two state from one or two extra electrons (O-1 or O-2 ). The minus two form of oxygen is strongly favored and is the most common result when oxygen is reduced in the process of oxidizing something else.

Researchers find that about 60 ppm of oxygen addition, over the life of the wine, leads to the best overall profile and stability. Each racking will introduce 5 to 7 ppm.

In wine, alcohol is not directly oxidizable by air; after all, vodka is very shelf stable! However, many of the complex compounds in wine are phenolics that do react with oxygen. Having done so, there can be a daisy chain of reactions that may result in oxidation of alcohol itself. Most common are undesirable byproducts of the phenolic reactions. Some of these are mediated by enzymes and some others, called nonenzymatic oxidation, are not. Oxidation of alcohol is one of the latter and results in the development of acetaldehyde, a compound that gives a nutty or bruised apple aroma to the wine. Other non-enzymatic effects include loss of aroma and brown color development from oxidation of red pigments. All these reactions are faster at high pH than at low pH.

Among the enzymatic reactions, the enzyme tyrosinase is present in sound fruit. While it can facilitate oxidation, it is inhibited by sulfite. One of many good reasons to sulfite your must! The other major oxidation enzyme is laccase. It is not present in sound fruit, but occurs in moldy grapes. Sort those grapes before crushing and remove moldy fruit, because laccase is not sulfite sensitive and oxidation will continue after crush. Both enzyme pathways lead to suppression of aroma compounds and development of brown colors. At crush, sulfite the must with about 50 ppm (mg/L) of sulfite. If you cold soak, you may want to do another sulfite addition halfway through your soaking period. Since the reactions are faster at high pH, plan a tartaric acid addition if pH is high or titratable acidity (TA) is low. Inoculate with yeast as soon as sulfite dissipates or promptly at the end of the cold soak to get fermentation started quickly. Specialized yeast nutrients like OptiRed® can help stabilize color against browning. 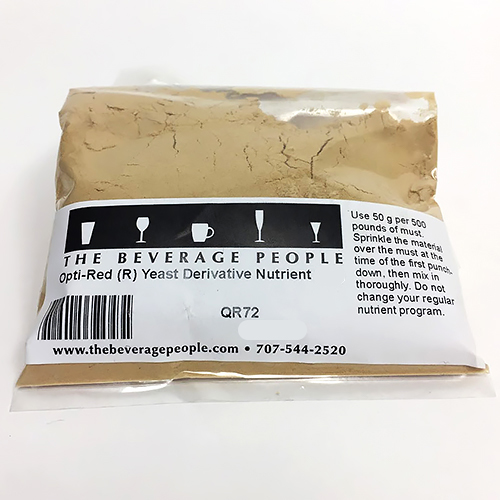 Now that you are off to a great start on your fermentation, it is time for me to reverse my advice on aeration! That’s right, yeast needs oxygen to grow vigorously and produce healthy cell membranes that will withstand rising alcohol levels. Early air exposure can also help maintain color stability. So for the first few days of a red wine fermentation, aerate the must. You can do this by using a small fan to blow off the layer of carbon dioxide gas in your fermentor just before a punchdown, and splash the must vigorously as you punch to mix in some air. Once fermentation slows down and the cap begins to fall, reverse course on air again. Use more gentle punchdowns and do not vigorously aerate.

The next stage is pressing and we are back to minimizing oxygen exposure. Work quickly and minimize splashing as you press and transfer the new wine. Avoid hard pressing to minimize extraction of highly reactive phenolic compounds that facilitate later oxidation. Get the wine into a closed container fitted with an airlock. If you have not already inoculated for malolactic fermentation, do so right away. When the last stages of primary fermentation are finished along with ML, if desired, get the wine into topped-up containers with fermentation locks and begin your sulfite program. Maintain free sulfite levels according to the pH chart provided here. In bulk aging, a very small amount of oxygen can help stabilize color and round out the tannic profile. Barrel aging is ideal for the small additional transfer needed and the barrel allows the oxygen in via a very slow transfer through and between the staves and whenever the barrel bung is pulled out.

Headspace is any container will greatly increase the oxygen transfer and is a virtual guarantee of oxidation and browning. Top up all carboys, tanks, and barrels! Commercial winemakers will sometimes age in stainless steel tanks with deliberate “microoxygenation” to simulate barrel aging, but there are no reliable home systems for that.

When you bottle, some additional air exposure is inevitable. Make sure your sulfite level is properly adjusted, work quickly, and consider purging with an inert gas to minimize oxygen transfer. Even with careful protection, most wines will go into “bottle shock” where rapid oxidation reactions occur, aromas are suppressed, and flavors are subdued. Mark your calendar three to six weeks after bottling before drinking to allow the condition to resolve.

Except for the occasional benefits described above, avoid aerating your wine! While some improvement comes about from the right exposure to air, problems of browning and oxidation are much more likely. Top up all containers, rack with a pump or siphon instead of pouring, and keep your sulfite at recommended levels right up to bottling. While sometimes your friend, oxygen is more often the enemy of fine wine.

So what’s wrong with its counterpart, reduction?

So what’s wrong with its counterpart, reduction? For that situation, the most common bad actor is sulfur. While oxygen, as noted earlier, spontaneously adopts 0, -1, or -2 oxidation states, sulfur is much more versatile. Sulfur can be found in -2, -1, 0, +1, +2, +3, +4, +5, or +6 oxidation states. Because you already know LEO GER or OIL RIG, you recognize that the zero oxidation state is sulfur in its elemental form---that familiar yellow powder---and that +1 through +6, having lost negative electrons to develop positive states, are oxidized forms. The positive charges have come about when sulfur loses electrons for those forms and they are not the ones that concern us for “reduction.”  Some of them do come up in winemaking, primarily the +4 state in the sulfur dioxide we keep telling you about, but that’s another story.

As for reduced sulfur, that is the -1 and -2 oxidation states, the -2 version is much more common. In the simplest wine-related compound, it appears as hydrogen sulfide or H2S. Since hydrogen, H, is usually 0 or +1, in this case at +1 it combines with sulfur at -2 to form the stable molecule hydrogen sulfide. Hydrogen sulfide is one member of a much larger group of compounds that all include a reduced sulfur atom or two. Collectively, they are all volatile and they all stink; they are called the VRS or volatile reduced sulfur compounds. Hydrogen sulfide is often described as smelling like rotten eggs. Other members of the family may smell like onions, garlic, canned corn, or asparagus. So if you get stinky wine, and it is not the nutty/bruised apple odor of oxidation, suspect VRS.

Where did the VRS come from? There are four common pathways researchers have identified.

If despite your best efforts your wine does exhibit a VRS stink, it can be treated.

The most direct treatment is to add copper sulfate solution. Copper bonds with sulfide and drops out, where you can rack off of it after a couple of days. Commercial wineries are allowed to add up to 6 ppm of copper as treatment, but the maximum allowed residue is 0.5 ppm. If you use 1% copper sulfate solution, you can add up to 0.75 mL per gallon and not exceed the maximum residual level. If it improves the situation but does not completely correct it, you can probably safely add another 0.75 mL per gallon. If it takes more than that, you will want to determine your copper level with a wine lab test. If it comes back above 0.5 ppm copper, you can treat with Reskue yeast hulls to remove the excess copper.

So, that’s the evil twins. The VRS “reduced” stink is generally far more offensive than the nutty, bruised apple stink of oxidation. However, VRS can usually be completely removed with little or no negative effect on the wine. Oxidation damage is permanent. Top up every container, keep your sulfite levels up, and avoid excess aeration to make fresh, clean-tasting wine that is safe from the evil twins!